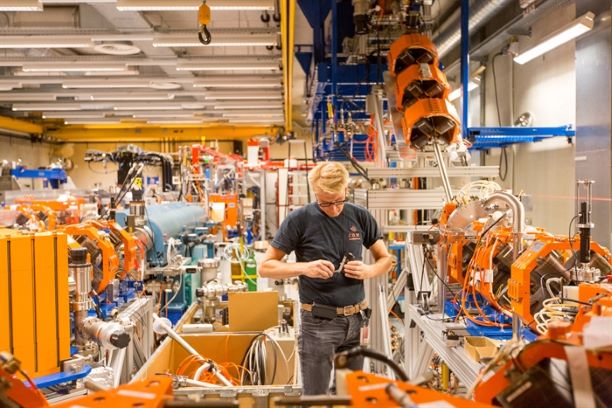 Inside the FELIX free-electron laser.

Just before winter break, I went to the Netherlands at Radboud University to use the FELIX free electron laser. I was there with Mike Van Stipdonk of the Duquesne Chemistry department and his students Luke Metzler and Connor Graça to do infrared spectrscopy on some gas-phase ion systems.

First the electrons are accelerated close to the speed of light, then they pass through a bank of alternating magnets (the “undulator”). The magnets bend the trajectory of the electrons into a wiggle shape. Because the electrons are changing direction, they are induced to emit light. The frequency of the light is determined by the initial speed of the electrons and the strength of the magnets. (Classical electrodynamics plus special relativity are sufficient to describe the effect; quantum effects only show up at low flux or extremely high frequencies.)

Initially, the light is not laser light, but monochromatic incoherent light like from an LED (specifically incoherent synchrotron radiation). However, once the light is bright enough, it starts pushing around the electrons themselves. The electrons are attracted to the nodes of the light waves through the ponderomotive effect. Once the electrons bunch up like this, they are synchronized with each other and emit light as a team, rather than individually. This collective behavior of the electrons causes the light to become coherent – all of the photons are in phase and at the same frequency – and we have laser light.

If the undulator is long enough, you don’t even need mirrors to enhance the light field (superradiance effect), but most FELs do have a traditional laser cavity to build up optical power.

The key advantages that FELs have over other lasers are

The major disadvantage is complexity and cost. For our particular experiments (mid-infrared spectroscopy), only a handful of FELs exist.

The FELIX laboratory contains three separate FELs: FELIX, FELICE, and FLARE. FELIX proper is the FEL that we use. It has two configurations depending on the desired wavelength range. The output wavelength is tuneable from 3 µm to 45 µm (the range we use) or from 30 µm to 150 µm. Each macro-pulse has an energy of up to 100 mJ at a 1 GHz repetition rate.

The FELICE laser is an FEL with experimental space inside the laser cavity for increased power, and FLARE is a longer-wavelength system (THz radiation).

We use FELIX to break molecular ions. If the laser photon energy matches one of the vibrational excitation energies of the molecule, the vibrational mode will be excited. Because there are so many photons, the ions experience many serial excitations until they fall apart. This processes is called InfraRed Multi-Photon Dissociation (IRMPD). IRMPD is a little counterintuitive. A single mid-IR photon doesn’t have enough energy to break apart the ion, but if you add up enough of them, you can. One subtlety is that higher excitations have a lower energy than the ground state excitation because of anharmonic effects, but this dispersion is small compared to the bandwidth of the pulse, so the ions can indeed absorb multiple photons.

By scanning the laser wavelength and recording the fraction of ions that are dissociated, we get the excitation spectrum. We compare this data with predicted spectra from quantum chemistry calculations (along with the mass spectra of the ions) to determine the structure of the ions.

What experiments are we doing?

On this trip we were looking at several ligand effects on uranyl (UO2) and some aromatic compounds found in spices. I’ll write about those in a later post, but we study the uranium ions because there are still a lot of unknowns about the chemistry of uranium and heavier elements. The spices are interesting to the Department of Homeland Security, and I’ll just leave that little teaser for now.